For 46 years there was Apartheid in South Africa, a policy of segregation and discrimination based on race. As part of Black History Month, Marc, our Head of Resources, reflects on his experience of growing up as a person of mixed race in Apartheid South Africa, where 2 million white people ruled over 50 million Black and mixed-race South Africans from 1948 until 1994:

The memories are still raw – the state sanctioned racial segregation and political and economic discrimination against non-whites. It was a work of evil genius that pervaded every part of society. As a child I remember “whites only” signs on train carriages, beaches and public toilets. Our schools were segregated, as were our churches and other places of worship. Mixed race people had more rights and better facilities than Black people and this aimed to further divide South Africans and prevent a unified uprising against the Apartheid government. I never shared a learning space with a Black or white person until I started University in 1992.

My mother, a teacher, was an outspoken anti-Apartheid activist who actively campaigned against Apartheid and was arrested on numerous occasions while attending anti-Apartheid demonstrations or protests. My father was a pacifist who believed in peaceful protest and did his best to protect us from the Apartheid system in his own quiet and determined way. One of the defining moments of my childhood was seeing my father angrily stand up to a policeman who asked us to leave a “whites only” beach – we had strayed a few metres over the boundary as the non-white side was filled to capacity and was unsafe. We eventually left the beach when more police arrived and threatened my dad with a beating and arrest. We made our way to the car and my dad said nothing for the entire ride home, anger and humiliation burning in his eyes. It was then that I decided that I would follow in my mother’s footsteps and become part of the ever-growing struggle against the Apartheid government.

I began attending mass rallies when I started high school. I remember have memories of being teargassed by police in armoured vehicles and running for my life as police opened fire with shotguns on kids as young as 13. I remember running down streets at the age of 14 with the smoke of burning tyre barricades making my eyes water and the rumble of armoured vehicles filling my ears. “No education without liberation” became a slogan used by student activist, but through all the mayhem and upheaval my parents made sure that I attended school and that I made the most of my education. My mom never stopped reminding me that education was something that no one could ever take away from you, not even the Apartheid government.

Then, in 1991 the world suddenly changed. International economic sanctions had taken their toll on the Apartheid government run by the much-maligned National Party and there was talk that the Apartheid government was willing to negotiate with the African National Congress (ANC) and other liberation organisations in order to consider a peaceful end to the Apartheid system. Nelson Mandela was released from prison and the ANC, along with other liberation organisations, were removed from the government’s terrorist organisations list. What followed was one of the most incredible acts of love and forgiveness I have ever had the joy of witnessing. In 1994 Black South Africans voted for the very first time (I queued for nearly 4 hours to cast my vote) and Nelson Mandela became the first ever Black South African president. He preached peace, forgiveness and unity and succeeded in delivering a peaceful transition of power from one of the most hateful systems in the history of modern society to a majority Black government that began to work at redressing the historical inequalities caused by the Apartheid system.

I am filled with sadness when I think of the generations that did not or could not escape the effects of Apartheid. Those that fell victim to the brutality of the state, those that spent decades in prison but most of all those who never managed to overcome the psychological trauma of a system that penalised them for the colour of their skin and constantly told them that they were “less than”, second class citizens in their own homeland.

28 years have passed since those first democratic elections and South Africa has had its share of ups and downs in that time, such as the economic apartheid that followed the death of racial apartheid as the economy struggled to recover from decades of economic sanctions and isolation. While government corruption threatens to undo all the wins that Nelson Mandela fought so hard for, the Rainbow Nation is still full of hope. The country remains one of the most breathtakingly beautiful places on the planet, the constitution is internationally heralded as an example of best practice and the teachings of Nelson Mandela and Desmond Tutu continue to inspire and guide those who strive to heal my beloved country.

I moved to the UK in 2008 and still go home to South Africa every year, besides during the Covid years.  My experience of Apartheid has taught me to never turn a blind eye to discrimination in any shape or form – I never assume that someone else is responsible for fixing the ills in our society. As the quote goes “the only thing necessary for evil to triumph is for good people to do nothing.”

Photo: Marc standing on Camps Bay Beach in Cape Town – a beach that was reserved for “whites only” until 1992 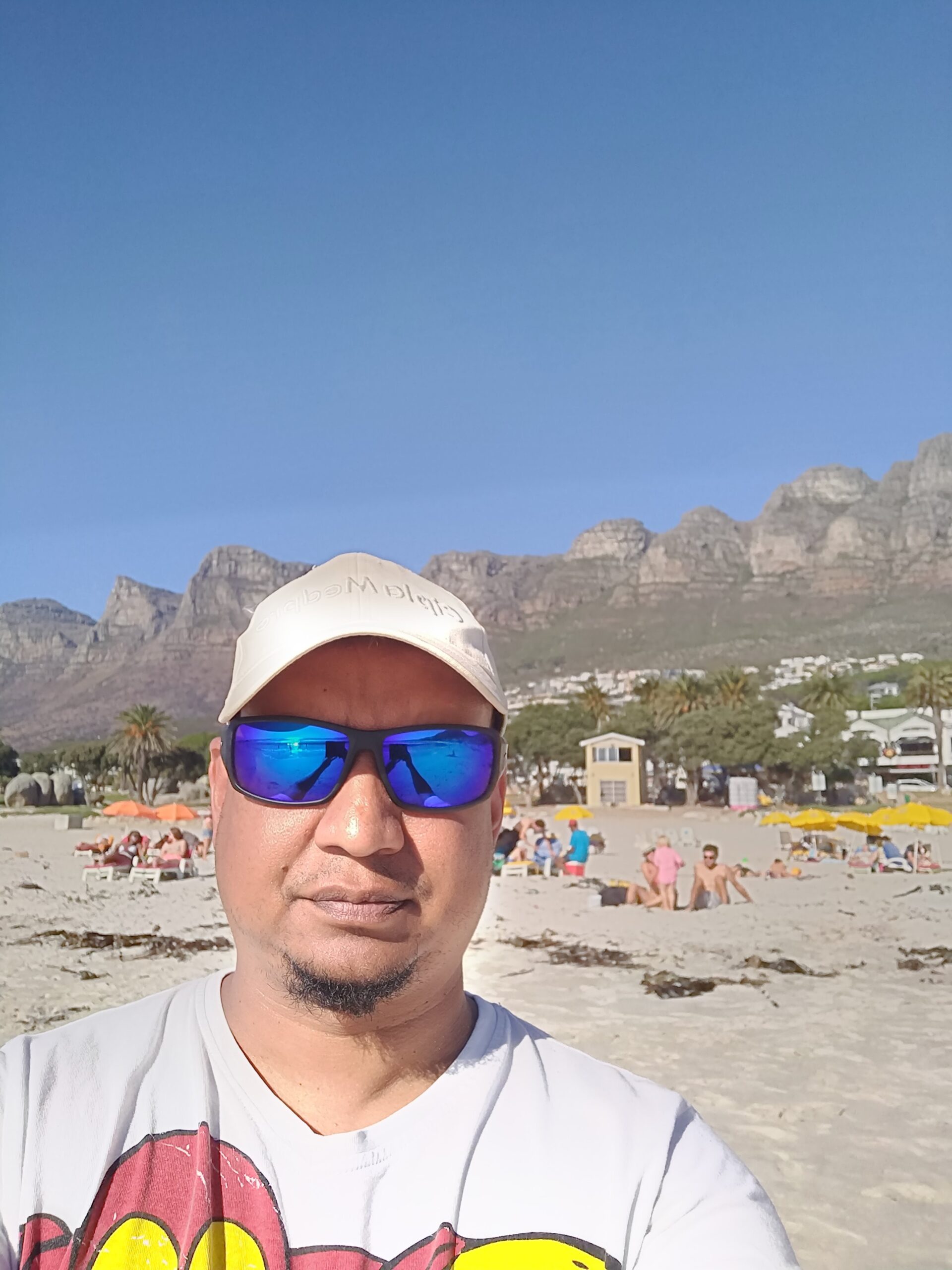